Where I’m Coming From (Originally published by MainelyMedia LLC)

A few years ago, I had the opportunity to travel back to the town where most of my family is from and I spent the first years of my life. Unfortunately, the occasion was a somber one.

My great aunt, the sister of my grandmother, passed away earlier in the week after a short stay in the hospital. She was a wonderful lady who always had a kind word for everyone she met. Although most of our family, my great aunt included, has moved out of the area, this is the place where we still go when someone dies.

A few years ago, we made the same trip when my grandfather passed away – even though he had lived more than 30 miles away for more than a decade. Actually, to say that this place is a town is actually a bit of a misnomer. It’s more like several small towns melded together into a group of more than 90,000 residents of every size, shape and color sharing the same zip code.

The town is Dorchester, Mass. and the neighborhood is called Neponset, named for the river that forms one of its boundaries.

Now, if you’you’ve been a reader of my columns for a while now, you may think that I was raised out in the country somewhere. Perhaps on a farm with rolling hills and meadows of wildflowers nearby, lots of trees and a river or pond in the area too – my younger days being spent listening to gentle breezes, birds singing and crickets a-chirping.

The reality is, for the first six years of my life, this could not have been further from the truth. For these years were spent living on an island of sorts.

We lived in a two family house in an apartment above my grandparents – the same house that my father and his five siblings grew up in. The house was located on a small peninsula of land that was bordered by such lovely things as a set of freight train tracks (no fence) followed by four sets of electrified MBTA tracks (fenced) on one side and an almost incomprehensible circular intersection of roads, highways and Morrissey Boulevard, on the other.

The Old House as it looks today…it’s now a commercial / business property.

Suffice to say, as a 4- and 5 year-old kid, it was pretty clear where my boundaries were. I would dare say that even the most adventurous child would be reluctant to explore much past the area patrolled by noisy trains, cars, trucks, buses and police cars.

Speaking of noise, did I mention that the neighborhood was also located directly under the incoming flight path of planes landing at Boston’s Logan Airport?

Ah, to be sitting at a nice, relaxing dinner as the traffic screams by, a trains’ whistle blows to the kids waving from a bridge, just as a 747 jumbo jet comes in for a landing. Years later, watching “The Blues Brother’s” movie, I couldn’t help but chuckle to myself as Jake and Elwood sleep like babies while the Chicago ‘El’ trains continuously rumble past the front of their apartment building. Been there, done that.

However, for all the incessant noise that accompanies city life, there was also a natural playground that I found there as a child. Perhaps it was because the house was built well below street level, but most of the sound from the road actually floated harmlessly above us while we played in the yard below.

Added to this, my grandfather maintained a good-sized garden, an abundant compost pile and several rain barrels by which he kept his plants watered. This, during a time (the mid 1970s) when “going green” meant you probably just ate a bad TV dinner. The yard also featured a gnarly crab apple tree that annually supplied my cousins and me with ammunition for apple “wars.” (OK, perhaps one or two trains passing were targeted on occasion too.)

My family and I moved out of the house when I was 6. We moved out to a suburban town where my father was working at the time. Looking back now, I’m pretty sure that the school busing turmoil had something to do with it too.

When we moved out, my aunt and uncle moved in. For the rest of my childhood, every holiday was spent back at the house with my grandparents, aunts, uncles and cousins. My grandmother’s sister, the one who just passed away, lived around the corner. We’d sometimes walk down to her house to visit and meet up with our second cousins and the like.

As I mentioned earlier, my grandfather eventually moved out of the house too. My grandmother passed away some years earlier and the old place was getting more and more difficult for him to maintain on his own. Holidays were now split between different relatives houses and for a while, there was very little reason to travel back to the “old neighborhood.”

Over the years, I would wonder what it would have been like to live the rest of my life in that place – the island, the oasis of security in an otherwise hostile world. Who knows, maybe I could have been a member of the “New Kids on The Block?” 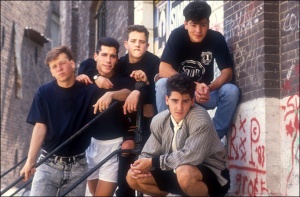 Who Knows ?? I coulda been a contenda !!

Now, 30 years later, we are all drawn back to this place again. Like fish coming back upstream to the place where they were born, so too my family now comes back – mostly to remember those who have died. We talk about all the changes to the places around us while trying to ignore the changes happening in each one of us. Infants are now teenagers, children are now adults and adults are now seniors.

So, here we are. The old neighborhood, the old church, the old cemetery (within earshot of the same Expressway and fittingly, the only cemetery in the country with train tracks running through the middle of it.) Strangely though, I’m feeling relaxed and completely at ease among all the noise and congestion.

This is the place we came from…and it’s the place that many in my family have chosen to come back to as a final resting place.

As I spend the summer in search of some fun and a little peace and quiet, I’m going to try and remember the feeling I had while standing on a busy sidewalk, in our old neighborhood, as the city roared all around me.

Peace, after all, is where you decide to find it.

Sharing is Caring: If you liked it, share it.

What do you think? Let's talk. Cancel reply